The Moon is a Place

In 1961, to most people, the Moon was just a shape-shifting light in the night sky. Even today, when staring up at it, it is hard to imagine that there are footprints there. That decoration up there, however spectacularly mysterious it looks, does not strike most of us as a place. But, in 1961, JFK told the American people that “We choose to go to the moon” and “[we] should commit [ourselves] to achieving the goal, before this decade is out, of landing a man on the Moon and returning him safely to the Earth.”

These words came at a time when cordless phones hadn’t been invented, leftovers were heated in a pot on the stove and FM radios weren’t available in cars. If that was indeed possible to visit that disk in the sky, we didn’t have the technology to do so but we did have the imagination. 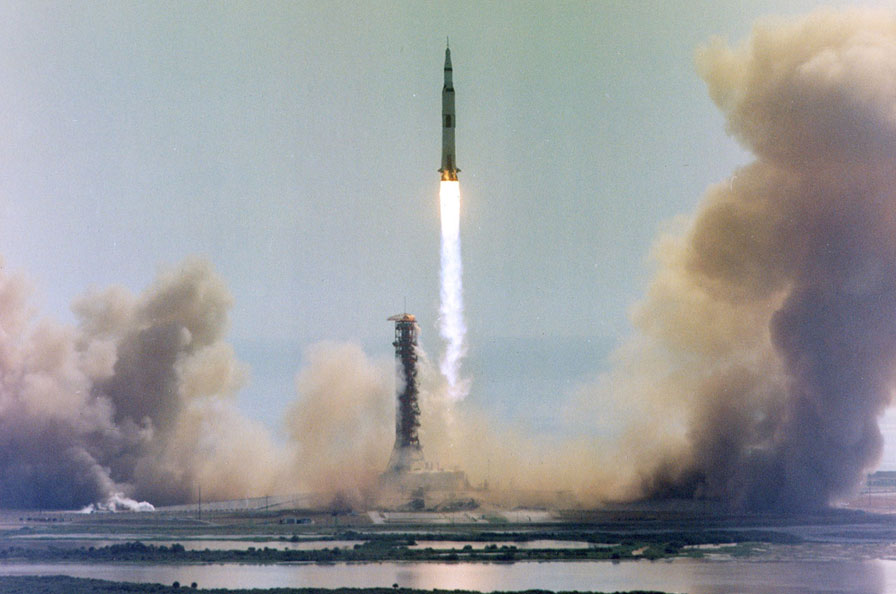 The rocket carrying Neil Armstrong, Buzz Aldrin and Michael Collins to the moon (in glorified tin can at the top, with navigation computers no more powerful than a pocket calculator) blasts off on July 16, 1969. Credit: NASA

It was a thrilling giant leap for mankind when Neil Armstrong and Buzz Aldrin stepped onto the moon’s surface in their hand-stitched suits.

It was thought to be the beginning of a new era for our curious and exploratory species. The empty black expanse above was talked about as a new frontier, a new ocean, as JFK put it.

But it seems we’ve lost interest. It has been 50 years since the remarkable first human visit to the moon happened, with computers no more powerful than a pocket calculator. Some say this is the way it should be, that we should not continue to explore. After all, don't we already have enough problems here at home? Problems like violence between people, starvation and carbon in the atmosphere.

What if more people on the planet felt connected to something larger than themselves and larger than their nation? What if we came to more deeply appreciate the infinite beauty of how interconnected and reliant all life is on all other life forms? At the risk of sounding like huge granola fans, we’ll ask one more question: What if we became fully awake to the sheer cosmic unlikeliness and the great fortune that we have for the world we live in?

Voyager 1 is the farthest human made object from Earth. It is a space probe launched by NASA in 1977. Its primary mission ended in 1980, but, remarkably, it continues to communicate with NASA, almost 35 years after launch. It runs on about the power of a typical household incandescent light bulb and records data to an 8-track tape machine.

In 1990 as it was leaving our Solar System it turned its camera backwards to take one last photo: a portrait of Earth from 20 billion kilometers away.

The photo was titled “Pale Blue Dot”, named after the one pixel that Earth occupied in the expanse.

Astronomer Carl Sagan, understands the connection between space exploration and our spiritual health.

“From this distant vantage point, the Earth might not seem of any particular interest. But for us, it's different. Consider again that dot. That's here. That's home. That's us. On it everyone you love, everyone you know, everyone you ever heard of, every human being who ever was, lived out their lives. The aggregate of our joy and suffering, thousands of confident religions, ideologies, and economic doctrines, every hunter and forager, every hero and coward, every creator and destroyer of civilization, every king and peasant, every young couple in love, every mother and father, hopeful child, inventor and explorer, every teacher of morals, every corrupt politician, every ‘superstar,’ every ‘supreme leader,’ every saint and sinner in the history of our species lived there – on a mote of dust suspended in a sunbeam.

“The Earth is a very small stage in a vast cosmic arena. Think of the rivers of blood spilled by all those generals and emperors so that in glory and triumph they could become the momentary masters of a fraction of a dot. Think of the endless cruelties visited by the inhabitants of one corner of this pixel on the scarcely distinguishable inhabitants of some other corner. How frequent their misunderstandings, how eager they are to kill one another, how fervent their hatreds. Our posturings, our imagined self-importance, the delusion that we have some privileged position in the universe, are challenged by this point of pale light. Our planet is a lonely speck in the great enveloping cosmic dark. In our obscurity – in all this vastness – there is no hint that help will come from elsewhere to save us from ourselves.

“The Earth is the only world known, so far, to harbor life. There is nowhere else, at least in the near future, to which our species could migrate. Visit, yes. Settle, not yet. Like it or not, for the moment, the Earth is where we make our stand. It has been said that astronomy is a humbling and character-building experience. There is perhaps no better demonstration of the folly of human conceits than this distant image of our tiny world. To me, it underscores our responsibility to deal more kindly with one another and to preserve and cherish the pale blue dot, the only home we've ever known.”

You never know what you'll find

Exploration of any kind leads to unintended discoveries. You do not have to look very far to find by-products of the exploration process that have had real impacts on our lives.

Had what’s-his-face not left his laboratory kind of messy, he would not have found mould/penicillin in his petri dish. An attempt at developing a heart treatment became a way to help stressed out dudes get hard-ons. A manned mission to the Moon resulted in a paradigm shattering photo that helped spark the environmentalist movement: The photo taken by Apollo 8 of Earth rising above the horizon on the Moon has been called “the most influential environmental photograph ever taken.” It provided a new perspective of the Earth as a vulnerable object, far from the original intent of the mission.

It will be the greatest adventure

Elon Musk is the founder of the small company that’s been embarrassing all the other automakers. His company has been selling electric 4-door sedans that accelerate faster than a McLaren F1 and you can’t go very far in San Francisco without seeing one on the street. He spends most of his time working on what he perceives as humanity’s biggest problems, but still finds time in his day to work on his company, SpaceX whose goal is to colonize Mars.

“I think it's one of the most inspiring and interesting things that we could try to do. It's one of the greatest adventures that humanity could ever embark upon. You know, life has to be about more than solving problems. If all that life is about is solving problems then why bother getting up in the morning? There have to be things that inspire you to be proud to be a member of humanity. The Apollo program is certainly an example of that. Only a handful of people went to the Moon, and yet, actually, we all went to the Moon. We went with them vicariously. We shared in that adventure.”

Humans have a deep need to explore. This is non-negotiable, no matter how many problems we have here on Earth. It’s part of what it means to be us.

Today, we can look up at the night sky and marvel at its mystery and imagine that there are boot imprints up there on that big light. The Moon is a place. We brought back some dirt from that C-shaped object hanging in the night sky.