Draw Your Own Crime Trends

Picture yourself in 1991. Maybe you weren’t even born. Since then crime has been in steady decline in Canada. 1 All those years there have been fewer and fewer crimes, and the crimes that do happen have, on average, been less and less severe.

Meanwhile, those we’ve entrusted with the country seem to be turning more and more to C.S.I. Miami as their trusted news source. Here is a bit from the beginning of a speech made by the Prime Minister himself:

“As you know, Canada is a great country.

And one of the things that has made it a great country is our traditionally low rates of crime.

In fact, our peaceful, law-abiding communities are part of Canada’s traditional identity and values.

But times are changing… the safe streets and safe neighbourhoods that Canadians have come to expect as part of our way of life are threatened by rising levels of crime… Clearly this cannot go on.”

These words came fifteen years into a dramatic wide-sweeping decline of crime. 2

It was a good try, but crime still does not rank as an important election issue. Almost all Canadians say they feel safe from crime. 3 People are just as happy to walk in their neighbourhoods as they were in the 1970s. 4 This is just as you would expect from the residents of one of the safest places ever in the history of civilization. 5 Only three Western countries have lower fear of crime than Canadians. The Swiss, Australians, English, Spanish, French, Northern Irish and Scots are all more scared of each other than we are. 6 Unfortunately, Americans feel safer than we do, even with their alleged gun crime problem and Fox Horror Show, where every day is Halloween.

Since it is unacceptable to lose to the USA in this category, we really should fight the War on Terror, waging war on the fear salesforce. But that sounds like a lot of effort for the summertime, so for now, below is a blank graph for you to get creative and draw your own crime trends. Get the kids involved too. It’s fun. 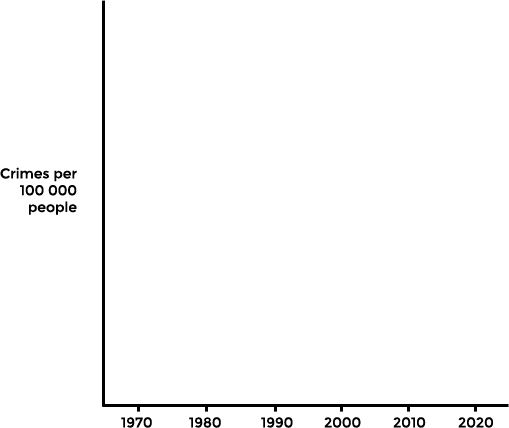